A control valve is a valve used to control fluid flow by varying the size of the flow passage as directed by a signal from a controller.[1] This enables the direct control of flow rate and the consequential control of process quantities such as pressure, temperature, and liquid level.

In automatic control terminology a control valve is termed a "final control element".

What is a Control Valve?

Control valves automatically regulate pressure and/or flow rate, and are available for any pressure. If different plant systems operate up to, and at pressure/temperature combinations that require Class 300 valves, sometimes (where the design permits), all control valves chosen will be Class 300 for interchange-ability. However, if none of the systems exceeds the ratings for Class 150 valves, this is not necessary. 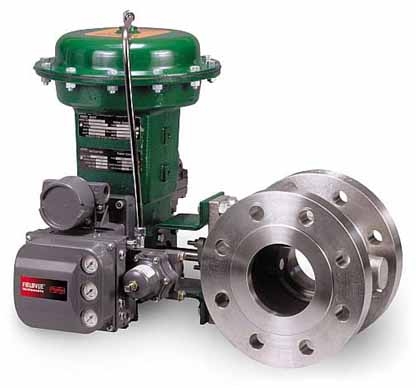 Globe valves are normally used for control, and their ends are usually flanged for ease of maintenance. Depending on their type of supply, the disk is moved by a hydraulic, pneumatic, electrical or mechanical actuator. The valve modulates flow through movement of a valve plug in relation to the port(s) located within the valve body. The valve plug is attached to a valve stem, which, in turn, is connected to the actuator.

Process plants consist of hundreds, or even thousands, of control loops all networked together to produce a product to be offered for sale. Each of these control loops is designed to keep some important process variable such as pressure, flow, level, temperature, etc. within a required operating range to ensure the quality of the end product. Each of these loops receives and internally creates disturbances that detrimentally affect the process variable, and interaction from other loops in the network provides disturbances that influence the process variable.

To reduce the effect of these load disturbances, sensors and transmitters collect information about the process variable and its relationship to some desired set point. A controller then processes this information and decides what must be done to get the process variable back to where it should be after a load disturbance occurs. When all the measuring, comparing, and calculating are done, some type of final control element must implement the strategy selected by the controller.

The most common final control element in the process control industries is the control valve. The control valve manipulates a flowing fluid, such as gas, steam, water, or chemical compounds, to compensate for the load disturbance and keep the regulated process variable as close as possible to the desired set point.

Control valves may be the most important, but sometimes the most neglected, part of a control loop. The reason is usually the instrument engineer's unfamiliarity with the many facets, terminologies, and areas of engineering disciplines such as fluid mechanics, metallurgy, noise control, and piping and vessel design that can be involved depending on the severity of service conditions.

Any control loop usually consists of a sensor of the process condition, a transmitter and a controller that compares the "process variable" received from the transmitter with the "set point," i.e., the desired process condition. The controller, in turn, sends a corrective signal to the "final control element," the last part of the loop and the "muscle" of the process control system. While the sensors of the process variables are the eyes, the controller the brain, then the final control element is the hands of the control loop. This makes it the most important, alas sometimes the least understood, part of an automatic control system. This comes about, in part, due to our strong attachment to electronic systems and computers causing some neglect in the proper understanding and proper use of the all important hardware. 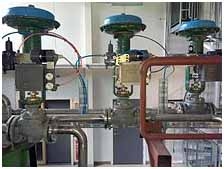 Air-actuated control valves each with a 4-20 ma "I to P" converter integral to a valve positioner. In this example each positioner is comparing the valve stem travel against control signal, and applying any correction.

The opening or closing of automatic control valves is usually done by electrical, hydraulic or pneumatic actuators. Normally with a modulating valve, which can be set to any position between fully open and fully closed, valve positioners are used to ensure the valve attains the desired degree of opening.

The pneumatic control signals are traditionally based on a pressure range of 3-15psi (0.2-1.0 bar), or more commonly now, an electrical signal of 4-20mA for industry, or 0-10V for HVAC systems. Electrical control now often includes a "Smart" communication signal superimposed on the 4-20mA control current, such that the health and verification of the valve position can be signalled back to the controller. The HART, Fieldbus Foundation, and Profibus are the most common protocols.

An automatic control valve consists of three main parts in which each part exist in several types and designs: 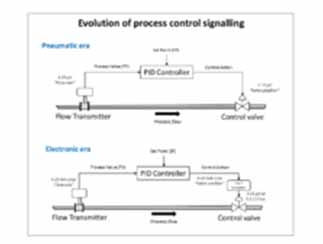 Showing the evolution of analogue control loop signalling from the pneumatic era to the electronic era. 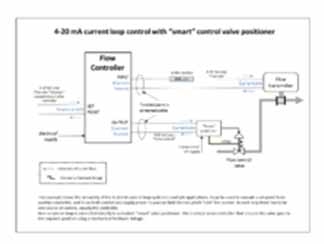 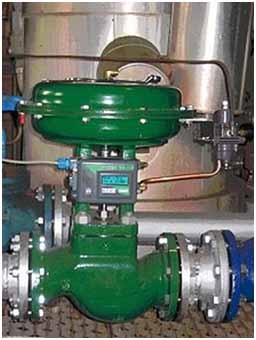 Taking the example of an air-operated valve, there are two control actions possible:

There can also be failure to safety modes:

As the pneumatic operation of valves, compared to motorised operation, has cost and reliability advantages, pneumatic actuation is still an industry standard. To allow the construction of hybrid systems, where the 4-20 mA is generated by the controller, but enables the use of pneumatic valves, a range of current to pressure (I to P) converters are available from manufacturers. These are usually located locally to the control valve and convert 4-20 mA to 3-15 psi (or (0.2 - 1.0 bar). This signal is then fed to the valve actuator or more commonly, a pneumatic positioner. This is a dedicated controller with a pneumatic nozzle and flapper arrangement and a mechanical linkage to sense the valve actuator movement. This ensures that problems of friction are overcome and the valve control element moves to the desired position, by comparing the actual valve regulating element position against the desired value; hence the name "positioner". As a mechanical linkage is used for this, the positioner has to be mounted on the valve body. A positioner also allows the use of higher air pressures for valve actuation, which is particularly useful with cylinder type valve actuators.

With the development of cheap industrial micro-processors, "smart" valve positioners have become available since the mid-1980s and are very popular for new installations. These include an I to P converter, plus valve position and condition monitoring in an integral unit mounted on the valve body. The valve position and status are fed back over the current loop to the controller, using such as the HART protocol. This allows further verification that the valve is operating as desired.

A huge variety of valve types and control operation exist. However, there are two main forms of action; the sliding stem and the rotary action.

The most common and versatile types of control valves are sliding-stem globe, V-notch ball, butterfly and angle types. Their popularity derives from rugged construction and the many options available that make them suitable for a variety of process applications. Control valve bodies may be categorized as below:

The image below shows how a control valve can be used to control rate of flow in a line. The "controller" receives the pressure signals, compares them with pressure drop for the desired flow and if the actual flow is different, adjusts the control valve to increase or decrease the flow.

Comparable arrangements can be devised to control any of numerous process variables. Temperature, pressure, level and flow rate are the most common controlled variables. 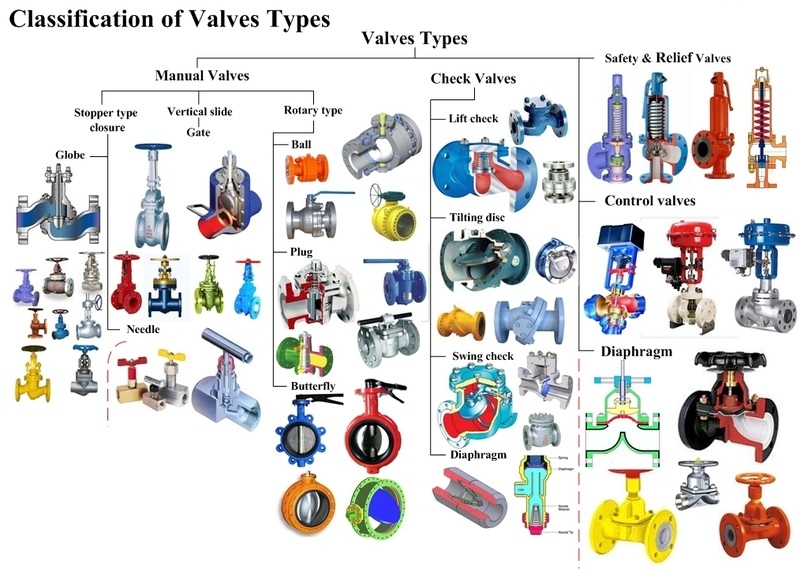 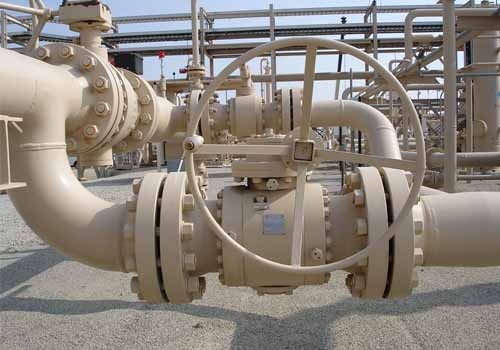